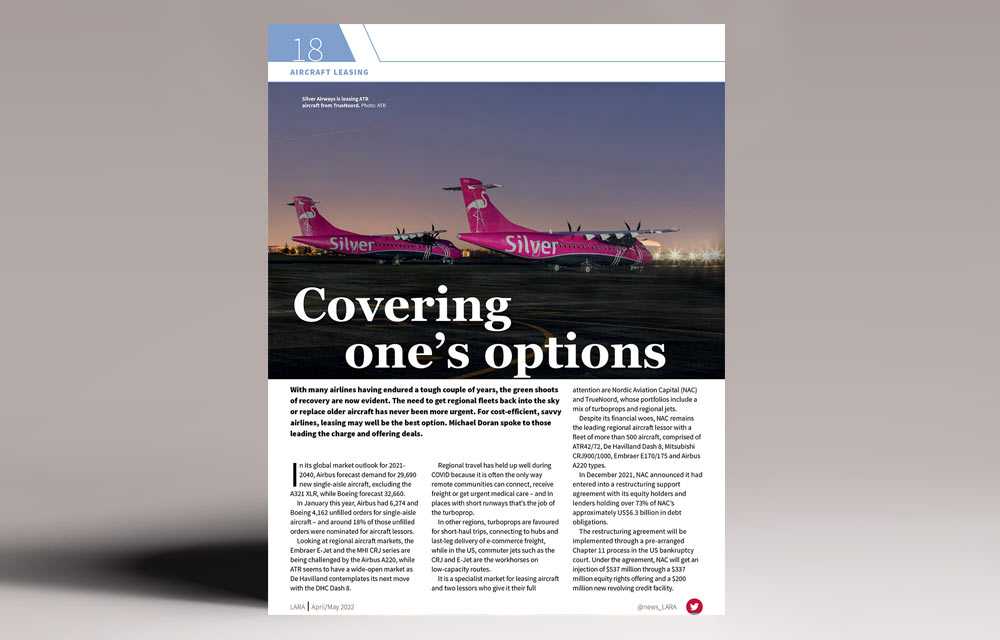 With many airlines having endured a tough couple of years, the green shoots of recovery are now evident. The need to get regional fleets back into the sky or replace older aircraft has never been more urgent. For cost-efficient, savvy airlines, leasing may well be the best option. Michael Doran spoke to those leading the charge and offering deals.

Looking at regional aircraft markets, the Embraer E-Jet and the MHI CRJ series are being challenged by the Airbus A220, while ATR seems to have a wide-open market as De Havilland contemplates its next move with the DHC Dash 8.

Regional travel has held up well during COVID because it is often the only way remote communities can connect, receive freight or get urgent medical care – and in places with short runways that’s the job of the turboprop.

In other regions, turboprops are favoured for short-haul trips, connecting to hubs and last-leg delivery of e-commerce freight, while in the US, commuter jets such as the CRJ and E-Jet are the workhorses on low-capacity routes.

It is a specialist market for leasing aircraft and two lessors who give it their full attention are Nordic Aviation Capital (NAC) and TrueNoord, whose portfolios include a mix of turboprops and regional jets.

Despite its financial woes, NAC remains the leading regional aircraft lessor with a fleet of more than 500 aircraft, comprised of ATR42/72, De Havilland Dash 8, Mitsubishi CRJ900/1000, Embraer E170/175 and Airbus A220 types.

In December 2021, NAC announced it had entered into a restructuring support agreement with its equity holders and lenders holding over 73% of NAC’s approximately US$6.3 billion in debt obligations.

The restructuring agreement will be implemented through a pre-arranged Chapter 11 process in the US bankruptcy court. Under the agreement, NAC will get an injection of $537 million through a $337 million equity rights offering and a $200 million new revolving credit facility.

It has also obtained a $170 million debtor in possession financing facility from existing creditors to help fund the Chapter 11 process.

When NAC emerges from Chapter 11 it will be majority-owned by its largest creditors and a new board of directors will be appointed. Founder and former Chairman Martin Moller will leave the company after 30 years of service and in the announcement he expressed his confidence in NAC’s business model.

A look at NAC’s 2020/2021 results is a quick guide to understanding what a difficult financial state the company was in, with a full-year loss of $2.36 billion, aircraft values impaired and lease revenue down by 15%, with more than 100 leases on agreed rental deferrals.

Despite the loss, NAC maintained a positive outlook, saying: “Throughout the summer months, the company has reported a strong pick-up in placement activity, including reporting 14 deliveries across all regions, improving on 2019 figures by 50%. Additionally, NAC lease extensions have increased 45% year to date compared to the same period in 2019.”

In February this year, with an eye on better times ahead, NAC appointed Klaus Heinemann, a former CEO of AerCap Holdings, as a strategy consultant. He will become NAC’s non-executive Chairman when the company emerges from the Chapter 11 process.

On a brighter note, since July 2021 the company has delivered eight aircraft – five ATR 72s, two E190s and one Dash 8 – to a mix of customers and signed an agreement with the new operator of the Aer Lingus regional routes, Emerald Airlines, to lease four ATR 72 aircraft.

Headquartered in Amsterdam and with offices in London, Singapore and Dublin, TrueNoord is a specialist regional aircraft lessor with its sights firmly set on the 50- to 150-seat class of aircraft.

It has a young, diversified fleet of 56 aircraft, made up of Airbus, ATR, De Havilland Canada, Embraer, and MHI-RJ aircraft with an average age of just seven years and a portfolio value of around $974 million.

TrueNoord leases aircraft to operators in North and South America, Europe, Africa, India, Asia and Australia. To find out what is happening in the company’s markets, LARA spoke to two of its management team: Carst Lindeboom, who looks after the Asia-Pacific region, and Garry Topp, who has North, South and Central America to tend to.

While the Asia-Pacific is referred to as a region, it is certainly not a homogenous market, and the impact of COVID has played out very differently within the individual nations and their respective aviation markets.

In 2019, TrueNoord made the move to be closer to the market and its customers by opening a representative office in Singapore, headed by its Sales Director Asia-Pacific, Carst Lindeboom, who says that being a part of the region is proving vital to the company’s success.

“I think that’s key for operating a leasing company in the Asia-Pacific,” he says. “Specifically because of the nature of the country, the culture and the people, it’s really important to be there. Even being able to communicate in the same time zone and know what’s going on in the region is important, and we’ve seen the results over the last two years.”

Reflecting on the regional market, Lindeboom says it has already rebounded strongly, especially when compared to narrowbody or long-haul operations, although some countries have fared much better than others.

He adds that with passenger demand down, some airlines switched to using regional aircraft on routes previously flown by a narrowbody, boosting their utilisation.

“I think the overall picture we see is that the market is picking up, with bright spots here and there, while some countries are a bit lagging. But overall it’s pretty positive and we’re happy that the market’s picking up in our segment and we’re ready to play an active role in that.”

China and Vietnam were two of those bright spots, having rebounded to prepandemic levels, but the arrival of the Omicron variant hit their markets particularly hard, significantly slowing air travel – although signs of recovery are now emerging.

At the Singapore Airshow, ATR announced that India’s only public airline, Alliance Air, has signed a deal to acquire two ATR 42-600 aircraft to be leased from TrueNoord, with deliveries to start in mid-2022 and adding to its existing 18 ATR 72-600s.

Lindeboom feels very confident about the Indian market and its prospects – confidence that extends to the country’s South Asian neighbours of Bangladesh, Sri Lanka and Nepal, which he says are all showing steady growth.

“In North Asia we see countries like Taiwan, Japan and South Korea looking at acquiring more aircraft and hopefully we will be picking up opportunities in Australia, where last year we added our first aircraft there – an Embraer E190 to Cobham Aviation Services Australia,” he says.

“I think we already see our pipeline growing and we’ve seen many airlines looking ahead and planning some growth, so there are opportunities there.

“Lease rentals are going up again, not only because there’s less supply and more demand, but also because of the increasing interest rates – which are now already priced in the new deals.”

As TrueNoord Sales Director and Head of Americas, Garry Topp, has a varied market to develop, stretching from the far north of Canada down to the tip of South America and everywhere in between.

Unsurprisingly, he tells LARA it’s a mixed picture, with quite a difference between North America and South, Central and Latin America, but overall he sees good opportunities for TrueNoord.

“Starting in Canada there is Air Canada and a tail of smaller players who often do specialist missions and have received federal support to help them through COVID,” he says.

“The rebound has been such that Air Canada ended up turning down additional cash support from the government, so Canada is certainly on the rebound.

“In the US, the airline industry receives substantial federal assistance through the CARES Act, so the industry is flush with cash right now and they’re using that cash to rebound very quickly.

“With domestic flying, passenger numbers are pretty much back to pre-pandemic levels and moving fast, and the international business is beginning to recover.”

With their wallets bulging, Topp says some of the bigger airlines are retiring older aircraft to focus on different types and optimise their fleets by buying new aircraft, within the boundaries of what their agreements with the pilot unions allow.

“It’s fair to say that US airlines are slightly distorted compared to the rest of the world because right now they’ve got so much cash to sit on,” he adds.

There is also movement on the regional front, with Canada’s Porter Airlines transitioning from its Q400 turboprops to Embraer E2 jets and new US entrant Breeze focusing on a mix of Airbus A220s and E-Jets.

In South Florida, TrueNoord client Silver Airways is making the case for short-haul modern turboprops by growing a thriving ATR fleet and there is also the use of ATRs for freight operations, including at FedEx and Amazon.

A looming issue for these cashed-up airlines and an opportunity for lessors that Topp identifies, is the age of the US commuter and regional jet fleet, including aircraft such as the CRJ200, ERJ135 and 145, which he describes as “getting old”.

Topp adds: “We’re well aware that Embraer is working hard on a nextgeneration turboprop and we also see that Silver is now putting new ATRs into play, so could the turboprop be widely accepted in the US again?

“Oil prices are rising, so I think one of the bigger operators can market a good turboprop product again. It will be interesting to see.”

South America is a series of countries going through very different experiences, but within the larger markets, such as Mexico and Brazil, the domestic markets stood up well to the pandemic and rebounded quickly to pre-COVID levels.

In some of the smaller markets, airlines battled tougher conditions with casualties along the way, such as Bolivia’s Amazonas.

“What’s happened is that operators with access to regional jets have been using those as workhorses during the COVID era and because the trip cost is lower they can operate on a leaner base than with larger aircraft,” says Topp.

“So we’ve observed that regional jets in Latin America have been used a lot and that’s true at our client Azul, where utilisation has been high.”

Looking ahead, Topp says he is quite optimistic about TrueNoord’s prospects in the region and sees a lot of potential in North, Central and South America.

“The landscape in the regional aircraft leasing market has shifted a bit in recent times and there are a lot of opportunities, so it’s good we’re putting ourselves in a position to take advantage of them.”