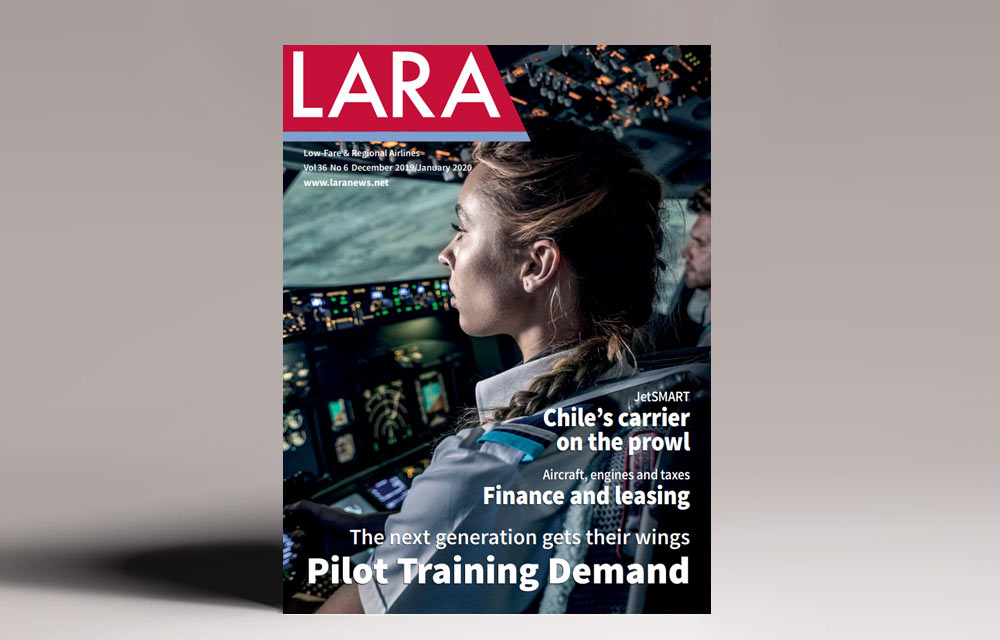 A path of lessor resistance

Asset managers must take tough decisions when an operator starts running into trouble and aircraft repossession is required. Bernie Baldwin reports on how the process is carried out.

It’s been a tough time recently for airlines, particularly in Europe where during September, four carriers – Thomas Cook Airlines, Adria Airways, Aigle Azur and XL Airways France – all ceased trading. The knock-on effects of these bankruptcies will reverberate for some time – and there may be more to come.

Some of these aircraft operated by those four airlines were on lease and thus being overseen by asset managers. Tracking what is going on within an airline is not always easy for them, but if they can spot irregularities, they have the possibility to offer solutions to help a client pull through in such circumstances.

SMBC Aviation Capital’s head of credit risk, Karl Creevy, assesses how help can be provided. “In the past 10 years, there have been approximately 350 airline bankruptcies impacting over 2,000 aircraft, according to aviation consultants IBA Group. This level of bankruptcies means that we take our approach to risk management very seriously. This is proven by the fact that the number of repossessions in our 18-year history amounts to just over 1% of all our leases,” he begins.

“While every case has its own nuances, we use a very structural approach that assesses asset risk, transaction structure risk and credit risk. We also use a variety of bespoke models, robust documentation and onsite technical and credit due diligence of all airlines,” Creevy continues. “We invest a significant amount of time and effort into our risk management. Our analysts monitor markets and spend time on the ground with our customers building relationships. All this helps us to make targeted and informed decisions.

“If an airline is facing operational challenges, we focus on working closely with the customer to understand these challenges and to explore potential solutions. In the unlikely event that we do need to repossess an aircraft, we want to make it as straightforward as possible for the customer,” he adds.

According to Auvinash Narayen, head of acquisitions and leasing at AerFin, how an asset manager might offer solutions to help a client depends on the asset type and the lease agreement that is in place. “First, I would review the market conditions to determine if the asset is an attractive candidate for part-out, which will depend largely on the market conditions and the availability of USM [unserviceable materials] and demand for major equipment such as landing gear, APUs and engines,” he remarks.

“Our primary focus, however, would be to provide the operator with a cost effective solution that will help reduce maintenance costs. This could be done through the supply of USM or green time leasing. Meanwhile, we would look at ways to protect the residual value of the asset in the eventuality that the aircraft is repossessed and commissioned for part-out,” Narayen confirms.

Angus von Schoenberg, head of investment strategy for regional aircraft leasing specialist TrueNoord, points out that whether someone is an asset manager of a portfolio of aircraft owned by a third party or the asset management function of a lessor monitoring its own portfolio, several items merit active monitoring “When looking at contract performance these would include: lease rentals, where delays would be a concern; maintenance reserves, where regular payment delays and requests for advance claim settlement would also be a concern; and insurance compliance, which must be in force at all times,” von Schoenberg emphasises.

“Quite obviously, the financial performance of airline customers also needs regular/active monitoring. Most leases require that financial statements are provided regularly. Deteriorating financial performance is obviously a warning signal that all is not as it might be. However, relying on such data has a significant weakness in that it generally provides information that is up to 18 months out of date, depending on how soon after the year end audited accounts are available. If there is financial deterioration this can be too late. Regular commercial discussions with senior airline management can complement the understanding of a customer’s financial position.

“If there are reasons to be concerned, a manager can seek other financial indicators. For example, a lease in Europe often provides access to Eurocontrol payment history. If there is a deteriorating payment pattern this can also be a warning signal. Likewise, with a deteriorating pattern in the payments to third-party MROs or parts suppliers or in power-by-thehour (PBH) deal payments. A tripartite PBH agreement that includes the lessor, lessee and the engine OEM should enable this to be monitored effectively,” he notes.

On the technical side, von Schoenberg advises asset managers to perform regular technical inspections of aircraft and their associated records. “This is vital to preserve residual value,” he declares, before elaborating on the areas for vigilance. “Warnings could include an increasing or excessive amount of deferred defects, repetitive log entries, as well as robbing of parts from temporarily grounded aircraft.

“Meanwhile, airworthiness directive (AD) compliance is important. While from a regulatory perspective non-compliance is unlikely as this could invalidate airworthiness, temporary compliance through repeat inspections rather than completing the AD with a terminating action could be an area of concern,” he adds.

Operational data in terms of yields, load factors (easier in the US where a lot of data is published) can often be difficult to procure from airlines, so regular contact can provide a good insight into airline performance. “Also, most leases require operational hours and cycle data to be reported regularly and any significant reductions in utilisation can be a cause for concern, as can high levels of staff turnover,” von Schoenberg observes.

“If an airline is under pressure, the asset manager needs to determine if that pressure is surviveable or terminal. If, for example, the operation provided by your aircraft type is causing the greatest cash losses, then it may be better to seek a voluntary repossession and require the lessee to put the aircraft into an appropriate remarketable condition. This might then help the airline survive, but in many cases there may be little that a lessor can do to ensure the carrier survives,” he admits.

“In those circumstances, it is often better to also seek a voluntary repossession prior to any bankruptcy proceedings. Alternatively, lessors can sometimes help with capacity management. This can apply for both new and used aircraft,” von Schoenberg comments. “With new aircraft it may even be possible to trade delivery positions with another carrier with whom the lessor has a relationship. For used aircraft it might be possible to arrange a sub-lease to another carrier which may alleviate capacity surplus or currency problems.”

Unfortunately, times do arrive when a repossession is necessary, and certain key factors can determine that. “The decision to take back an asset would largely be dictated by the credit committee and/or investors of the organisation. We would, however, need to prepare a contingency plan to manage the repossession of the asset and in the worst-case scenario, commission the aircraft for part out,” reports AerFin’s Narayen.

For Guljar Lehri, head of transactions and technical marketing at IBA Group, the determining factors requiring observation reflect some of von Schoenberg’s. “Clearly if there is any default on the lease and whether the airline is close to insolvency,” he remarks. “But then there are factors such as rising oil prices or political unrest.”

Richard Jacobs, TrueNoord’s chief commercial officer, lays out some of the questions that a lessor/asset manager must ask themselves when finally deciding to repossess. “They need to consider what confidence they have in the airline’s management to turn the company around? And what is the probability of survival if the turnaround is affected?” he suggests.

“Then they need to ask what risks are associated with both the repossession and with bankruptcy proceedings? And does the jurisdiction of the lessee help or hinder any repossession process?” he continues. “The condition of the aircraft (maintenance, carry-over items, missing parts) and its records must be considered. Also, they need to think about the cost and lead time of rectifying defects and putting the aircraft into a condition that will appeal to another operator.

“You might also keep a close eye on the views and actions of other lessors/financiers to the extent this can be determined,” Jacobs adds. “No lessor/manager will easily take a decision to take back an asset since, even if the risk of loss can be substantially mitigated, the workload involved in taking back an aircraft and placing it elsewhere is significant. Most will only repossess if all other options have been exhausted.”

SMBC’s Creevy believes that, in general, the aircraft repossession process has two distinct stages. “The first is the preliminary investigative stage where we monitor the airline and the second is the crisis management stage (repossession) stage,” he says. “If we are aware that an airline is experiencing financial difficulties, we increase technical and credit due diligence and re-assess the situation on an ongoing basis. In the unlikely situation that an aircraft does need to be repossessed, it is important to act quickly and maintain regular communication with the airline.

“Repossessing an aircraft is always a last resort and it is important that every eventuality has been explored with the airline before this occurs,” he adds, concurring with Jacobs’ comments. “Based on previous repossession experience, our strength is our team’s ability to act swiftly and efficiently. Ceasing operations is one of the most difficult decisions a senior management team will ever have to take, and we would like to consider that we are empathetic to our customer’s situation and work to deliver the best outcome for all involved.”

Once the decision has been made to retrieve the asset, a few procedures need to be enacted. IBA’s Lehri details a few. “Legal counsel in the country of jurisdiction has to serve notice of termination on grounds of default. Then it must be ensured that the aircraft is in an airworthy condition. If not, a maintenance statement will be required if a permit to fly is needed from the aviation authority,” he elaborates “Aircraft records retrieval and signed status reports are then needed. The aircraft will have to be de-registered and assign to a CAMO where it will be placed into storage or into maintenance if needed,” Lehri adds.

Karl Creevy picks up and adds to the elements in the repossession process. “In jurisdictions where self-help remedies are not available to a lessor, litigation through the relevant courts may be required to obtain an order for possession,” he notes. “From a technical perspective, plans will be made to have the aircraft accepted on an alternative (temporary) aircraft register once de-registered, with local maintenance providers lined up to assist the lessor with maintenance once control of the aircraft is assumed.

“Clearances from customs and/or airport authorities will be a key requirement,” Creevy stresses. “The lessor will need to arrange the ferry of the aircraft to a prearranged parking location or maintenance service provider in contemplation of the re-leasing of the aircraft asset to another operator. Clearances for the ferry flight crews and ground handling services will need to be arranged as part of those ferry flight arrangements.”

Legal considerations including the ability to repossess in various jurisdictions, concern TrueNoord’s von Schoenberg. “Some can be difficult. Even within Europe there are big variations,” he reports. “From a legal perspective, repossession in the UK or Ireland is relatively straightforward, but in many Southern European countries, it can be much more complex.

“Lessors should consider if the Cape Town Convention has not only been ratified in the applicable country, but whether local legislation has been enacted to apply it,” he advises. “Consider too, the position of any lenders that may have lent against the aircraft on a limited recourse basis.”

All these points underline the need for good relations between the asset manager and the operator. Nobody likes to see an airline struggling but maintaining strong communications will help all sides eventually.