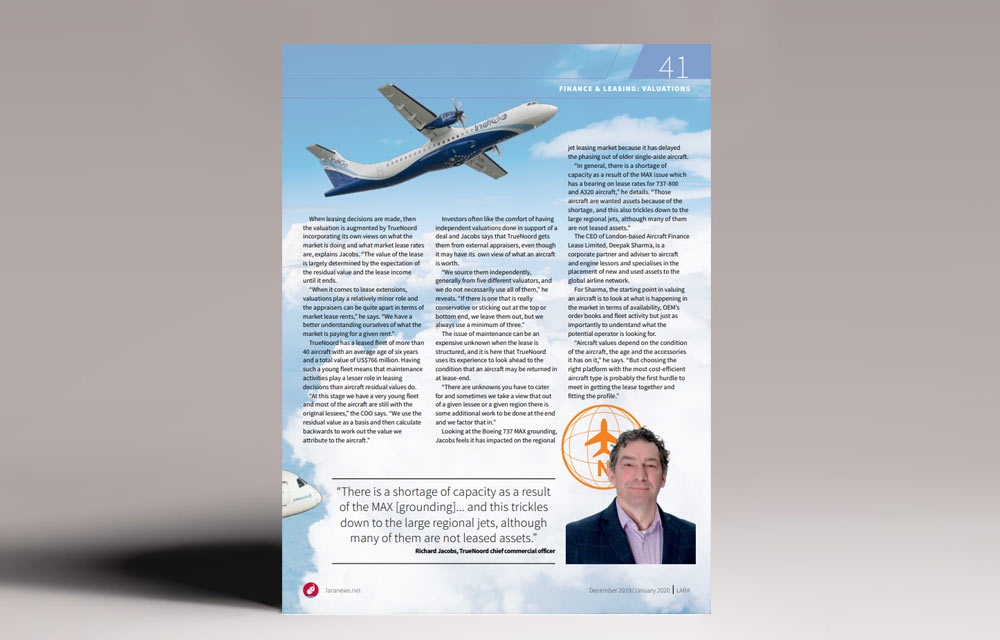 Because they’re worth it…

Michael Doran examines the complex nature of predicting aircraft values in an industry that’s going through significant changes at present.

The latest Airbus Global Market Forecast says that there will be 39,210 new aircraft delivered over the next 20 years at a value of US$6 trillion. Each of these aircraft will need to be financed at least once and many will be traded to a new operator in their lifetime.

At some point in each aircraft’s life its value will need to be calculated and with an A380, for example, having more than four million components working out the value is not a simple process.

Fortunately, the International Society of Transport Aircraft Trading or ISTAT was formed in 1983 to provide its membership of aviation professionals with high quality networking and education opportunities, and since then it has been training and accrediting aircraft valuers on a global basis. Although it has been going for 26 years there are only 80 certified ISTAT Appraisers
practising, making it one of aviation’s most exclusive clubs.

The executive director of the ISTAT Appraisers’ Program, Jeff Straebler, says: “We are growing with the people being certified outnumbering those who are retiring and there are around 100 people currently in the program.”

The size and nature of commercial aircraft financing means that investors and financiers will often want to see valuations from thirdparty, independent appraisers and in that space the ISTAT certified appraiser is the undisputed gold standard.

To become an ISTAT certified appraiser is not a simple process, requiring five years of industry experience with two of those conducting appraisals and the successful completion of exams covering general valuation theory, technical expertise, finance and professional ethics.

For those select few who become certified appraisers, the biggest issue they face is gathering market intelligence, due to the opaque nature of aircraft sales, trading and financing markets.

“The aircraft market is almost completely opaque, and everyone plays their cards pretty close to their chest,” Straebler says. “To do a home appraisal you have effectively unlimited data points to work with but for aircraft we have very few. It’s really about people wanting to keep their private information private so appraisers have to rely on their networks to get that information.”

One of the cornerstones of aircraft valuation is the ‘mid-time mid-life’ protocol which is the hypothetical mid-point in the aircraft’s technical status used to calculate the Base Value for the valuation. Mid-time is the time between overhauls of the airframe, engines, landing gear and APU whereas mid-life refers to parts which have a defined life and must be replaced when that life is used up.

By adopting the ISTAT mid-time mid-life protocol, the appraiser can then adjust an aircraft’s value from that mid-point to reflect the actual maintenance status of the aircraft and hence its overall value.

The larger appraisers have their own databases which they sell to people and the default will be the mid-time, mid-life value and then you adjust the figure in the database for life and condition. However, it’s rarely that simple: “If you are a financier, and someone has shown you some mid-life values off a database, and you say ‘OK that’s my number so I can do a loan to value against that’, then you are really playing with fire as an investor if you don’t appreciate what is underlying those numbers or what the future market looks like,” warns Straebler.

TrueNoord is a specialist in the regional aircraft leasing and lease management field and its chief commercial officer, Richard Jacobs, says that aircraft valuations play an important but not dominant role in aircraft financing decisions.

“We will look at valuations if we are doing investment decisions and they will have a bearing on the lending capacity, the size of loan and the leverage, so valuations play a role there,” he says. “We will be looking at the valuations to determine the aircraft’s value.”

When leasing decisions are made, then the valuation is augmented by TrueNoord incorporating its own views on what the market is doing and what market lease rates are, explains Jacobs. “The value of the lease is largely determined by the expectation of the residual value and the lease income until it ends.

“When it comes to lease extensions, valuations play a relatively minor role and the appraisers can be quite apart in terms of market lease rents,” he says. “We have a better understanding ourselves of what the market is paying for a given rent.”

TrueNoord has a leased fleet of more than 40 aircraft with an average age of six years and a total value of US$766 million. Having such a young fleet means that maintenance activities play a lesser role in leasing decisions than aircraft residual values do.

“At this stage we have a very young fleet and most of the aircraft are still with the original lessees,” the COO says. “We use the residual value as a basis and then calculate backwards to work out the value we attribute to the aircraft.”

Investors often like the comfort of having independent valuations done in support of a deal and Jacobs says that TrueNoord gets them from external appraisers, even though it may have its own view of what an aircraft is worth.

“We source them independently, generally from five different valuators, and we do not necessarily use all of them,” he reveals. “If there is one that is really conservative or sticking out at the top or bottom end, we leave them out, but we always use a minimum of three.”

The issue of maintenance can be an expensive unknown when the lease is structured, and it is here that TrueNoord uses its experience to look ahead to the condition that an aircraft may be returned in at lease-end.

“There are unknowns you have to cater for and sometimes we take a view that out of a given lessee or a given region there is some additional work to be done at the end and we factor that in.”

Looking at the Boeing 737 MAX grounding, Jacobs feels it has impacted on the regional jet leasing market because it has delayed the phasing out of older single-aisle aircraft.

“In general, there is a shortage of capacity as a result of the MAX issue which has a bearing on lease rates for 737-800 and A320 aircraft,” he details. “Those aircraft are wanted assets because of the shortage, and this also trickles down to the large regional jets, although many of them are not leased assets.”

The CEO of London-based Aircraft Finance Lease Limited, Deepak Sharma, is a corporate partner and adviser to aircraft and engine lessors and specialises in the placement of new and used assets to the global airline network.

For Sharma, the starting point in valuing an aircraft is to look at what is happening in the market in terms of availability, OEM’s order books and fleet activity but just as importantly to understand what the potential operator is looking for.

“Aircraft values depend on the condition of the aircraft, the age and the accessories it has on it,” he says. “But choosing the right platform with the most cost-efficient aircraft type is probably the first hurdle to meet in getting the lease together and fitting the profile.”

He gives the example of an airline who has decided it needs a 90-seat regional jet that performs within a specified operating envelope and how meeting these needs will deliver the most value and profit to a prospective lessor.

Returned in a fit state?

Looking at what value is from both the lessor and the lessee perspective, Sharma believes it is all around the long-, mid and short-term costs that you are going to inherit with the aircraft.

“There is a considerable difference in value if you get back an aircraft with different parts in it or service documents are missing,” he says. “Also, what are the state of the engines and how much life do they have left before the next maintenance event is needed?”

When more formal valuations are needed Aircraft Finance Leasing will source these from its corporate partners who are experienced in this side of the market. While he understands the valuation process, he also sees its challenges.

“There are companies out there who sell valuations, but any analysis is going to have deviations, so it is the degree of deviation that matters the most,” he says. “Nobody could have predicted the battery issue on the 787 or what is now happening with the 737 MAX because that’s something analysis can’t produce.”