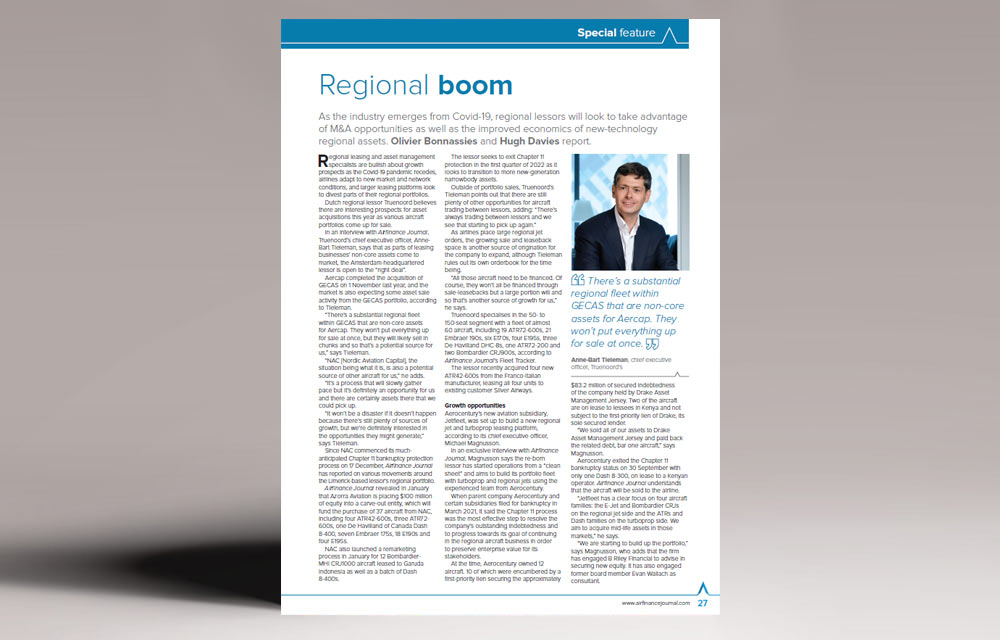 As the industry emerges from Covid-19, regional lessors will look to take advantage of M&A opportunities as well as the improved economics of new-technology regional assets. Olivier Bonnassies and Hugh Davies report.

Regional leasing and asset management specialists are bullish about growth prospects as the Covid-19 pandemic recedes, airlines adapt to new market and network conditions, and larger leasing platforms look to divest parts of their regional portfolios.

Dutch regional lessor Truenoord believes there are interesting prospects for asset acquisitions this year as various aircraft portfolios come up for sale.

In an interview with Airfinance Journal, Truenoord’s chief executive officer, Anne-Bart Tieleman, says that as parts of leasing businesses’ non-core assets come to market, the Amsterdam-headquartered lessor is open to the “right deal”.

Aercap completed the acquisition of GECAS on 1 November last year, and the market is also expecting some asset sale activity from the GECAS portfolio, according to Tieleman.

“There’s a substantial regional fleet within GECAS that are non-core assets for Aercap. They won’t put everything up for sale at once, but they will likely sell in chunks and so that’s a potential source for us,” says Tieleman.

“NAC [Nordic Aviation Capital], the situation being what it is, is also a potential source of other aircraft for us,” he adds.

“It’s a process that will slowly gather pace but it’s definitely an opportunity for us and there are certainly assets there that we could pick up.

“It won’t be a disaster if it doesn’t happen because there’s still plenty of sources of growth, but we’re definitely interested in the opportunities they might generate,” says Tieleman.

Since NAC commenced its much anticipated Chapter 11 bankruptcy protection process on 17 December, Airfinance Journal has reported on various movements around the Limerick-based lessor’s regional portfolio.

Airfinance Journal revealed in January that Azorra Aviation is placing $100 million of equity into a carve-out entity, which will fund the purchase of 37 aircraft from NAC, including four ATR42-600s, three ATR72-600s, one De Havilland of Canada Dash 8-400, seven Embraer 175s, 18 E190s and four E195s.

NAC also launched a remarketing process in January for 12 Bombardier-MHI CRJ1000 aircraft leased to Garuda Indonesia as well as a batch of Dash 8-400s.

The lessor seeks to exit Chapter 11 protection in the first quarter of 2022 as it looks to transition to more new-generation narrowbody assets.

As airlines place large regional jet orders, the growing sale and leaseback space is another source of origination for the company to expand, although Tieleman rules out its own orderbook for the time being.

“All those aircraft need to be financed. Of course, they won’t all be financed through sale-leasebacks but a large portion will and so that’s another source of growth for us,” he says.

Aerocentury’s new aviation subsidiary, Jetfleet, was set up to build a new regional jet and turboprop leasing platform, according to its chief executive officer, Michael Magnusson.

In an exclusive interview with Airfinance Journal, Magnusson says the re-born lessor has started operations from a “clean sheet” and aims to build its portfolio fleet with turboprop and regional jets using the experienced team from Aerocentury.

When parent company Aerocentury and certain subsidiaries filed for bankruptcy in March 2021, it said the Chapter 11 process was the most effective step to resolve the company’s outstanding indebtedness and to progress towards its goal of continuing in the regional aircraft business in order to preserve enterprise value for its stakeholders.

At the time, Aerocentury owned 12 aircraft. 10 of which were encumbered by a first-priority lien securing the approximately $83.2 million of secured indebtedness of the company held by Drake Asset Management Jersey. Two of the aircraft are on lease to lessees in Kenya and not subject to the first-priority lien of Drake, its sole secured lender.

“We sold all of our assets to Drake Asset Management Jersey and paid back the related debt, bar one aircraft,” says Magnusson. Aerocentury exited the Chapter 11 bankruptcy status on 30 September with only one Dash 8-300, on lease to a Kenyan operator. Airfinance Journal understands that the aircraft will be sold to the airline.

“Jetfleet has a clear focus on four aircraft families: the E-Jet and Bombardier CRJs on the regional jet side and the ATRs and Dash families on the turboprop side. We aim to acquire mid-life assets in those markets,” he says.

“We are starting to build up the portfolio,” says Magnusson, who adds that the firm has engaged B Riley Financial to advise in securing new equity. It has also engaged former board member Evan Wallach as consultant.

Magnusson explains that the focus on those assets reflects the company’s expertise in the 70- to 120-seat market.

Jetfleet’s business plan anticipates a fleet size of up to 50 assets over the next five years, and Magnusson says the lessor has strong support from Aerocentury to develop its plan in the sector.

Magnusson sees investor appetite for regional aircraft lessors but believes the investor community needs to be comfortable in this segment of the market.

Elix Aviation Capital says it is also actively reviewing the development of investment opportunities in the market and will pursue those that align with its growth plans.

“We have built an experienced platform that has specialised in managing exposures in the regional market, specifically turboprops, and our growth objectives are across the full range of regional aircraft and adjacent opportunities,” says John Moore, Elix Aviation Capital’s chief executive officer.

“Elix offers a wide range of services to investors to originate and execute transactions and to provide lease/asset management services. The Elix vision is to be trusted for our passion and expertise in aircraft investment and the creation of value – and this is what will drive our development.”

Moore says Elix intends growing the business this year, working with its investor partners seeking to deploy capital in the market.

“The expansion will focus upon opportunities where the Elix edge in aviation risk management can provide an acceptable risk and return profile to the investor. We are not pursuing growth just for the sake of growth,” he says.

The preference will remain for assets that have long-term value and liquidity, rather than end-of-life assets, adds Moore.

“The regional sector is characterised by operators and aircraft in many markets that often are playing an essential role in domestic and regional transportation, which makes it less vulnerable to market disruptions and cycles. Consequently, we will continue to be active on every continent,” he says.

Its focus in the past has been more concentrated on the 50- to 70-seat segment, and Elix sees many opportunities in that part of the market for growth and replacement. However, the lessor also targets expansion into larger aircraft.

Elix purchased 22 turboprop aircraft with three options from NAC in a transaction valued at more than $100 million. It bought a mix of ATR42-300/-500s and DHC8-100/-300s from the world’s largest regional aircraft lessor.

Canadian regional lessor Chorus Aviation is not necessarily focused on large-scale M&A activity amid speculation around portfolios that may be up for sale.

“Whenever there are buying opportunities you have to look at the asset and the deployment of the asset. If you buy the asset that doesn’t have a home it ties up a lot of cash and there are a lot of surplus assets out there right now,” Chorus’s chief executive officer, Joe Randell, said during a recent earnings call.

“You have to look at whether it’s coming with leases attached, how long the lease is and quality of the credit. There are some credits that have struggled and continue to do so.

“While there are buy opportunities, what we don’t want to do is take on some of these opportunities that later become problems,” he says.

Market share is a secondary objective to Chorus. “Instead, we look at each deal in terms of the financial aspects and creditworthiness of the customer and balancing that with our own liquidity.

“While market share is nice to have, we’ve seen some large lessors with major market share that have not been successful, so we’re being very prudent and very careful,” he adds.

In late January, Airfinance Journal reported that Brookfield Asset Management, in partnership with Chorus Aviation, was one of two platforms in the final stages of bidding for the purchase of regional aircraft asset manager and lessor Falko Regional Aircraft.

New-technology regional jets such as the Airbus A220 and Embraer E2 have already garnered significant interest from the leasing community.

Airfinance Journal’s Fleet Tracker shows more than 80 such aircraft have already been delivered to lessors with a further 300 units on order.

This order backlog is split roughly two to one in favour of the A220 with regional lessors such as Chorus, Azorra and NAC committing to the A220; however, Azorra and Falko both have sizable E195-E2 orders.

For other regional players such as Truenoord, these aircraft types are on their wish list but only at the right price and the right returns.

“We’re seeing on the A220-300 market that some lessors are pretty aggressive but that’s fine with us. That’s the nature of the market and so we’ll continue to be patient and wait for the right deal,” says Tieleman.

“We’re happy to take new assets onboard if it makes sense from a risk perspective and a customer perspective,” he adds.

For its part, Aergo Capital, which has a large turboprop portfolio, expects to be a growing player in the new technology area, both with narrowbodies such as the Boeing 737 Max but also crossover regional aircraft such as the A220.

“We’ve been studying the A220 and it’s only a matter of time before we enter that space,” says Antony Snelleman, chief risk officer at Aergo.

He notes, however, that the turboprop segment will still “remain an important part of our portfolio”, noting that Aergo’s portfolio variety helps deploy capital as efficiently as possible to generate returns.

“We look for value across the spectrum. At times there’s pockets of value in different places. While some lessors specialise in certain areas, we will go where there’s efficiency and where we can generate quality returns for our shareholders rather than saying that we have to be in a certain area of the market,” adds Snelleman.

Chorus Aviation is examining all expansion opportunities available to it but says larger regional jets are “particularly attractive” as the company grows out of the Covid-19 pandemic.

“We’re looking at all opportunities including mid-life and older assets but we find the larger regional jets to be particularly attractive, especially the crossover jets like the A220s and E2, in particular,” says Chorus’s Randell.

“Turboprops are taking a while to pick up the surplus in the market, although ATR is upping production and moving into the freighter side as well,” he adds.

“The 75-seat jets are generally still in good demand especially in the US, although they are primarily used assets.”

Randell says the company sees opportunities in the crossover segment in particular as more airlines make the transition to new-technology regional jets to reshape their networks.

“I do see it becoming a larger part of the business moving forward. In this particular market we’ll be more of a niche player but there are clearly carriers that are moving in that direction that would fit the type of carrier profile we would target,” he adds.

“Our focus has primarily not been on the very large carriers but on the mid-to-smaller size and we’re very comfortable in that niche,” says Randell.

The lessor acquired its first A220-300 in late 2019 via the sale and leaseback market with Air Baltic through a mandate covering five aircraft.

“Air Baltic is a great example of a niche player that has been very successful and supportive in its home market,” explains Randell. “There are other opportunities such as those that we would pursue.”