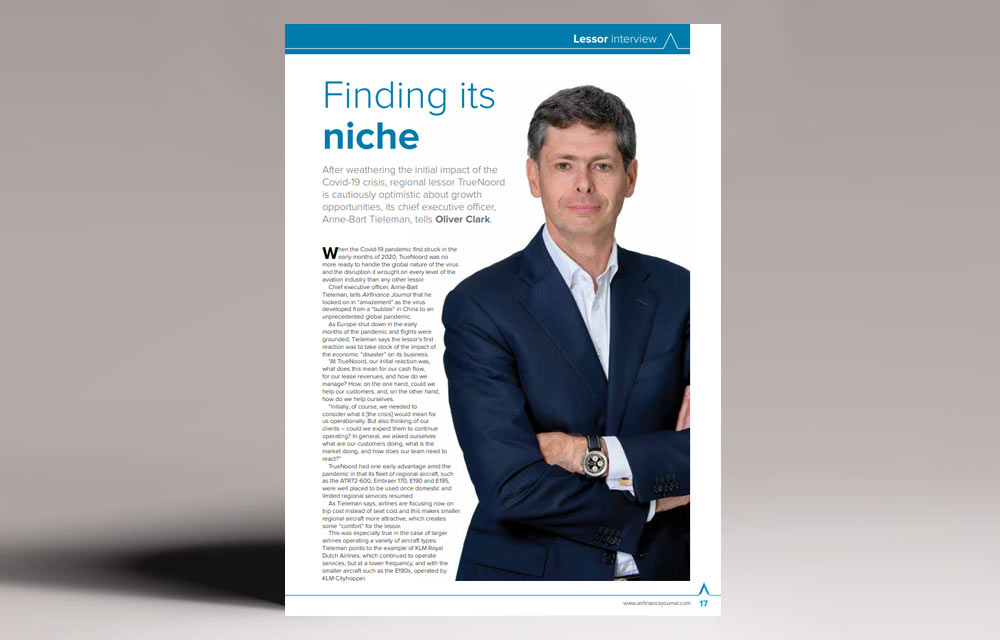 When the Covid-19 pandemic first struck in the early months of 2020, TrueNoord was no more ready to handle the global nature of the virus and the disruption it wrought on every level of the aviation industry than any other lessor.

Chief executive officer, Anne-Bart Tieleman, tells Airfinance Journal that he looked on in “amazement” as the virus developed from a “bubble” in China to an unprecedented global pandemic.

As Europe shut down in the early months of the pandemic and flights were grounded, Tieleman says the lessor’s first reaction was to take stock of the impact of the economic “disaster” on its business.

“At TrueNoord, our initial reaction was, what does this mean for our cash flow, for our lease revenues, and how do we manage? How, on the one hand, could we help our customers, and, on the other hand, how do we help ourselves.

“Initially, of course, we needed to consider what it [the crisis] would mean for us operationally. But also thinking of our clients – could we expect them to continue operating? In general, we asked ourselves what are our customers doing, what is the market doing, and how does our team need to react?”

TrueNoord had one early advantage amid the pandemic in that its fleet of regional aircraft, such as the ATR72-600, Embraer 170, E190 and E195, were well placed to be used once domestic and limited regional services resumed.

As Tieleman says, airlines are focusing now on trip cost instead of seat cost and this makes smaller regional aircraft more attractive, which creates some “comfort” for the lessor.

This was especially true in the case of larger airlines operating a variety of aircraft types. Tieleman points to the example of KLM Royal Dutch Airlines, which continued to operate services, but at a lower frequency, and with the smaller aircraft such as the E190s, operated by KLM Cityhopper.

As with all the other lessors amid the crisis, TrueNoord was immediately faced with rental deferral requests from customers.

Tieleman says the lessor looked within its capabilities to help its customers, but also had to be realistic in judging which airlines were likely to be able to repay their debts in reasonable time.

“Overall, I think we have been able to keep lease revenues north of 60% to 65% over the past six months. This is indicative of the quality of our portfolio, not too much concentration on one lessee, and TrueNoord has a decent diversification with high-quality, good airlines,” he says.

Of the 35% to 40% of remaining lease income, Tieleman says it is ether coming back via repayments of deferrals or via lease extensions, which he describes as a “win-win” outcome for both parties.

Tieleman says that the general perception in the market is that the recovery will be “slow”, with three years or more until the industry is back to pre-crisis levels.

In such a situation, he says that the biggest challenge facing lessors is dealing with the “huge amount” of overcapacity in the market, and the need to manage this situation effectively.

“The lessor community is a service-providing community. It is a strange service providing specialised very capital-intensive assets. The good people within this industry know and understand not just the financial implications of the business, but also the operational capabilities of the assets. In this global crisis, strong lessors observe the overcapacity which operators experience and should be able to find markets which need capacity,” he says.

Over the next 12 to 24 months or more, Tieleman says the “better” leasing companies will succeed in redeploying capacity, while those unable to move assets will struggle.

“Those perceptive leasing companies, in the end, are the potential winners, or perhaps ‘survivors’ is a better word, in this changing world,” he believes.

The TrueNoord fleet consists of about 50 aircraft. Airfinance Journal’s Fleet Tracker shows the lessor has 12 ATR72-600s, 21 E190s, six E170s and smaller numbers of other ATR, De Havilland of Canada and Bombardier aircraft.

The portfolio is well spread geographically, with most of its units in Europe and Asia, six in North America, four in Latin America and three in the CIS.

Tieleman says that the forecasts of the big manufacturers before the Covid-19 crisis predicted significant growth, with new aircraft needed to meet increased capacity demands, and replacement of older aircraft.

“Although growth will be slower, you will see an acceleration of older technology being put to rest as the industry helps itself meet environmental targets,” he says.

“We are convinced, and our shareholders are convinced, that there is a market niche in the 50- to 150-seat market. It is a specialist market with predominantly smaller airlines and correspondingly smaller deals that larger lessors are often unwilling to devote resources to.

“However, many large airlines also operate smaller aircraft in their fleet as they right-size for domestic or short-haul traffic, or now for lower demand,” he adds.

The lessor has previously set a target of growing its portfolio by between 15 and 20 aircraft a year.

Since the crisis began it has purchased three aircraft and is examining further potential deals. Tieleman says that young E170s and E190s, A220-300s or E2s are on “our wish list”.

He describes the approach as “opportunistic” but “cautious”, adding: “We definitely look at credit risk when we enter into new deals.”

Tieleman adds: “We focus on the good credits in our eyes and conclude the deals we think make sense. Those deals do exist, and we are looking at potential transactions. Let’s see how the situation develops.”

When Nordic Aviation Capital (NAC) decided to restructure its creditor debts via a scheme of arrangement in Ireland earlier this year in the wake of the Covid-19 crisis, some speculated whether other regional lessors would need to follow suit.

Tieleman says it is important to “understand the difference” between his business and that of NAC.

“TrueNoord is a growing company. We are at a different point on our growth path to NAC with our fleet of 50 aircraft a tenth of their size, and our main source of debt being secured bank finance,” he says.

“NAC used to be financed in that way too, but began some years ago a transition to a mix of secured and unsecured financing.

“Using private placements, NAC has started issuing unsecured financing and they were in the middle of this transition process to access other sources of finance – the US debt capital markets – when Covid-19 happened,” he says.

“We are in a different position, but have definitely learned from their experience. We are still able to grow on the basis of using secured bank financing and, over time, we will see if the market for unsecured finance is there for us too,” he adds.

Tieleman reveals that the lessor’s shareholders have put more equity into the business in the past six months, but does not disclose the amount.

While banks are more cautious, partly because they are confronted with deals “in difficulty”, he says that the capital markets are open for the “right credits”. The industry may “need to be patient” for the private placement to return, though.

“In terms of private placement, clearly that market is still there – it will look for the right yields. The situation at NAC has impacted the regional aircraft market in general. Time will tell. We just need to be patient, but that market will return with the right risk/return proposals,” says Tieleman.

Commenting on reports in late 2019 that TrueNoord was considering the sale of potentially all of its portfolio, Tieleman says there are “always rumours in the market”, but also notes that TrueNoord’s shareholders are private equity funds.

“TrueNoord’s cornerstone investors are private equity investors and it has always been understood that at some point in time they will want to sell their investment resulting in TrueNoord getting new shareholders,” he says.

“We have never considered selling our portfolio and that is still the case. Of course, we do sell aircraft. Last February we sold a CRJ200, for us a non-core asset, for a decent price. TrueNoord will sell assets, as all lessors do. We might even sell a portfolio, but we are firmly on a growth path,” he adds.

“Right now, in the present market I am not sure there would be ‘let’s sell’ deals for us to pursue. I expect there will be ‘let’s buy’ transactions.”

Tieleman is confident growth opportunities are out there for the lessor.

Noting that lessor ownership of the global fleet has reached about 48%, he says that in the regional aircraft, specifically the 50-seat market, ownership by lessors is lower but “it is catching up”.