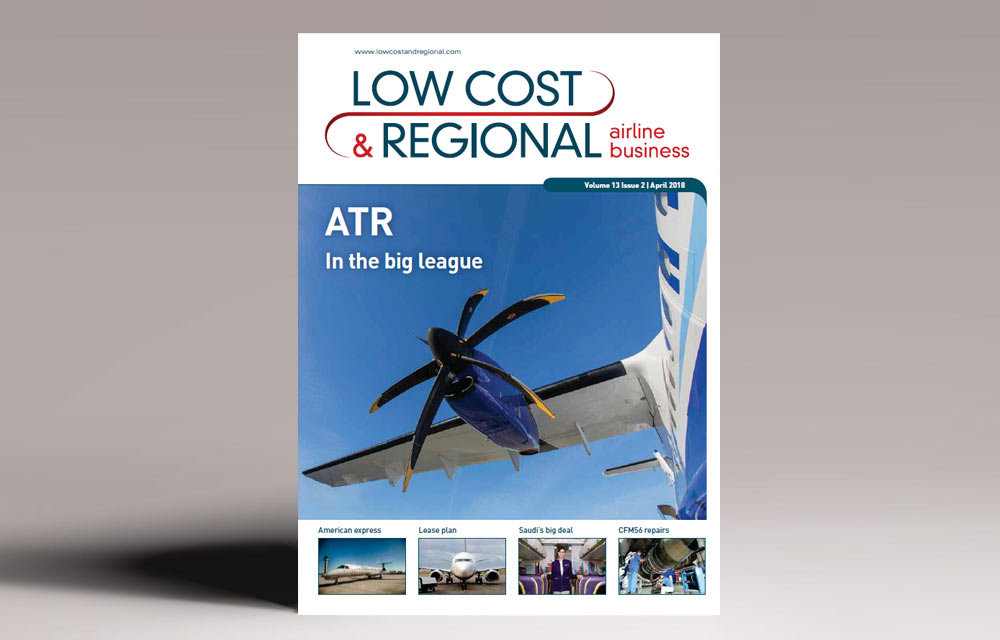 As demand for aircraft leasing continues to grow, Keith Mwanalushi looks more closely at the market and at how lease rates and values are shaping up.

Several reports have recently indicated that aircraft lessors are bullish about the global demand for aircraft and the relative health of airlines around the world. Despite some airline bankruptcies, mainly in Europe and other challenged areas in some parts of the world, the airline industry remains profitable and passenger demand continues to rise.

This trend mirrors the International Air Transport Association’s (IATA) global passenger traffic results for 2017 showing that demand (revenue passenger kilometres or RPKs) for the year rose 7.6% compared to 2016. This was well above the 10-year average annual growth rate of 5.5%.

As evidenced by aviation consultancy IBA, the market has witnessed an unprecedented surge in aircraft leasing over the past few years triggered by low interest rates, an above average rise in passenger traffic, low oil pricing and attractive returns. New arrivals have since entered the space in large numbers, mostly from China, and the demand for deals has reached an all-time high.

Looking at the general trends in the narrowbody lease market in 2018, Mike Yeomans, Head Analyst – Commercial Aircraft and Leasing at IBA signals that lease rates remain under pressure, particularly looking at new or young aircraft.

“This is true throughout the narrowbody space,” says Yeomans. “Competition remains fierce in the sale leaseback market and lease rate factors remain weak as a result. In January GECAS for instance announced it had arranged a sale-leaseback along with pre-delivery payment financing for Viva Air Group in a transaction for ten A320ceo aircraft to be delivered in 2018 and 2019.
New market entrants with low capital costs have driven down rents according to Yeomans and IBA has yet to see a reversal in this trend in 2018. “This is true for current, outgoing and new generation types. That said, with funding costs set to rise through this year we could see some pressure on the new entrants.”

With competition for deals fiercer than ever and with investors and lessors hunting further afield for yield, IBA highlights a need for effective mapping and management of risk, and advocates robust intelligence gathering and analysis.

But some deals are still attractive, even if they are risky. According to IBA, if there is a trend here it is that lower reserves are being paid and that less monitoring is being done.

It believes that lessors will be caught short as a result.

Key indicators that IBA has kept under watch since the beginning of last year concern the A320-200 and 737-800s lease ends and a potential collision of factors on the supply side that could impact on values and rentals. In a report IBA published in September 2017, it predicted a concentration of lease ends between the years 2019-22, with a peak towards 2022.

Yeomans suggests the expected trend is increasing numbers of redeliveries over the next few years. “Naturally many of the leases will be extended, however we must look at production ramp-ups on the new generation aircraft. The extensions are likely to be more near term.” In fact, there is ongoing talk about Boeing ramping up 737 production to as high as 64 aircraft per month and perhaps even more.

He says by the time the production goals of around 600 aircraft per year are reached the industry will likely see the neo and MAX displacing more ceo and NG aircraft from the current major carriers. “By about 2023, these new generation aircraft are expected to reach around 50% of the fleet size of the outgoing models. This is where we expect the ceo and NG to really feel the pinch. Of course, there are many variables. If fuel remains in check and traffic growth continues at reasonable levels, we should see more extensions. If fuel rises and or if there is a demand shock, we will see fewer lease extensions and the pressure will come much sooner,” Yeomans analyses.

Speaking on the recent arrival of the A320neo and the 737 MAXs, in 2017, there was really very little data between the lease rates of the ceo and NG aircraft and the new neo and MAX variants. “Largely this remains true, however some of the drivers behind this phenomenon are beginning to change.” Lease rates have been suppressed across the board for various reasons. Cheap debt, new market entrants and increased competition are just a few examples Yeomans mentions.

Low oil prices have meant that older aircraft have had a new lease of life and are staying in service longer and the benefits offered by new generation aircraft have been less apparent. “As we see interest rates rise, the lease rates should follow suit. Of course, this will be dependent on the aircraft type and the overall balance of supply and demand will ultimately dictate how the lease rates move.” The new generation aircraft should benefit most, as there is clearly a strong demand environment evidenced by the order backlogs and anticipates that the older technology aircraft will exhibit greater volatility should there be a significant rise in fuel.

Yeomans highlights that enduring delays in the delivery schedule of the A320neo family aircraft and ‘new issues’ with the Pratt & Whitney engine should put an impetus on operators to extend leases and hang on to their older aircraft a while longer. “Ultimately there will come a point where we see irreversible pressure on the older generation aircraft values and lease rates because of neo and MAX replacements. We are still a few years away from that in IBA’s view,” he says.

Looking at the sheer frenzy of orders being placed, LCCs are commanding orders for the narrowbodies in the market today. Seemingly, this position means the LCCs have significant and growing influence on the leasing market.

Yeomans believes there is quite a contrast across the low cost airlines, to the extent that they have embraced leasing and incorporated it into their business models.

Firstly, he concedes that all the major LCCs lease to some degree. “Some of the long-established LCCs such as Southwest and Ryanair have moved more towards ownership, whereas others such as Wizz Air favour the leasing model,” he observes.

With such long backlogs for carriers placing orders, leasing will certainly play a part in the approach of any new entrant LCCs over the coming years. LCCs often rely on lessors to fuel their capacity growth in any case.

“Of course, we have seen some challenges such as the recent failure of airberlin, but generally the LCCs have represented some of the better performing carriers in recent years. So overall the LCC model has been positive for lessors, giving opportunities to place multiple aircraft with good credit lessees,” he states.

IBA has seen some carriers moving in different directions with regards leasing: “For example IndiGo has announced plans to move more towards ownership and this is something we have seen as LCCs mature.”

Leasing gives lessees some flexibility to manage capacity requirements over time, but of course there are always trade-offs. “Notably IndiGo has taken most of its neo aircraft on six-year lease terms and it will be interesting to see what these aircraft re-lease for when the time comes, if they are not extended. It is likely we will see some returns given the size of the carrier’s backlog,” Yeomans anticipates.

Amongst the global leasing and finance community there is often a perception that regional aviation is a small niche area, yet in January 2018 there were 7,500 regional jets and turboprops in active service; hardly a small market, suggests Angus von Schoenberg, Industry Officer at TrueNoord – the regional aircraft lessor headquartered in Amsterdam.

However, there are some key differences to the larger aircraft leasing space: Regional airlines in general have much smaller fleets and are often less well financially capitalised. While some large regional carriers do exist particularly in the US, the average fleet size for turboprop operators is 6-7 aircraft and 10-12 for regional jet carriers, compared to an average of 22 for single aisle aircraft, according to figures from TrueNoord.

Leasing as a tool for financing regional aircraft is also less mature than for larger aircraft, however it is growing rapidly.

Although there is clearly a relationship between lease rates and values, there is little uniformity across all the types, says von Schoenberg. He says, while for narrowbody and widebody jets there may be a lease rate factor of 0.6% or less for new examples, this is not the case for the regional aircraft types.

“One of the reasons that a few more players have been looking at the regional market in recent years is that the lease rate factors are higher, typically above 0.8% for both turboprops and regional jets.

Some believe that the regional sector is becoming more competitive with newer or expanded players including TrueNoord, but recent years have seen a roughly equal amount of consolidation.”

Von Schoenberg reports that there has been some temporary softness in ATR72-600 values in recent years caused by large orders placed by bigger lessors. This capacity has now been mostly absorbed so that values of newer models are now recovering, although some of this overhang has still to be delivered to lessees that have committed to lower rates. “Actual transaction-based rates will also vary according to the credit quality of the counterparty, maintenance quality and oversight, and jurisdictional risk,” he says.

By contrast the Dash-8 Q-400 market is a tale of two halves. Experts at TrueNoord observe there is little supply for aircraft under 10 years old and plenty of demand, but there is increasing supply of older aircraft of early noughties vintage with less demand. “This means that values and lease rates for newer aircraft are holding up well.”
In terms of regional jets, the CRJ900, which has generated most of its sales in North America, remains popular in that market but has found limited traction elsewhere with certain exceptions.

“The CRJ1000 has a very narrow operator base principally at Air Nostrum, so there are no trades from which to derive current market values. At new values below $30 million, the CRJ900 and the slightly larger 1000 remain inexpensive capacity,” von Schoenberg tells.
“The equivalent E190 Embraer E-jets have new values well more than $30 million and remain above these values for around three years from new.” He says lease rates in the range of $260,000-280,000 are average for new deliveries with some outliers either side. Adding that lease rates and values for new E175s are lower approximately in proportion to their smaller capacity.

Von Schoenberg feels the challenge in the Embraer market is that a substantial proportion of the in-service fleet including smaller E170s were produced between 2006 and 2010. “A growing proportion of these aircraft are starting to come off their first leases and transition to their second operators.”

Appraisers believe lease rates for such 10-year-old examples could now be well below $150,000 per month with values below $15 million.