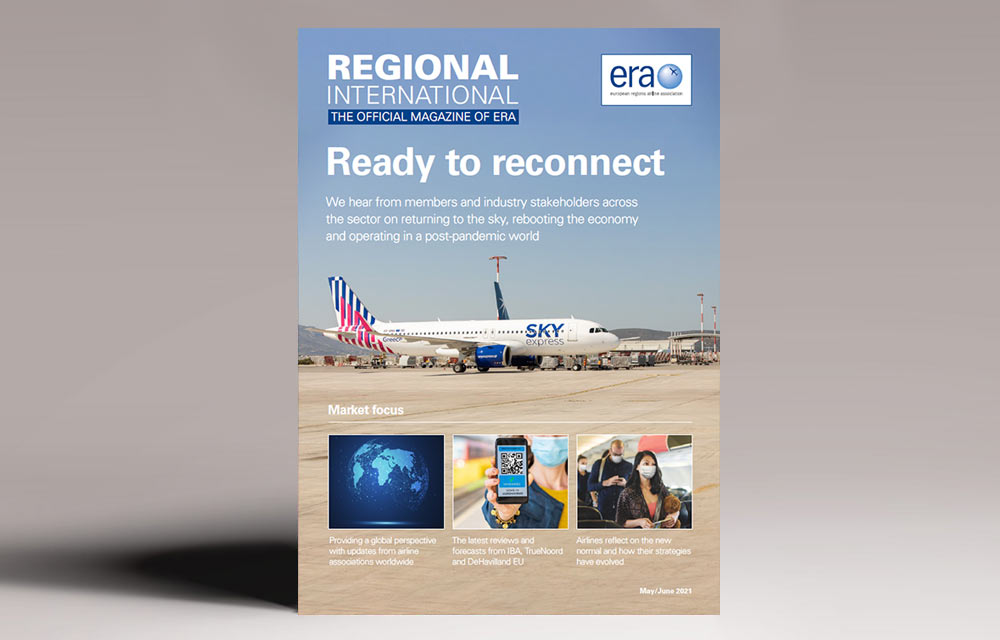 In a post-pandemic world, choosing an aircraft could begin to follow the ‘Goldilocks principle’ of not too large and not too small. Regional International speaks to TrueNoord’s Angus von Schoenberg, who examines the evidence and explains why crossover jets could be just right.

With international travel expected to remain restricted for longer, the regional market is projected to be a leader in aviation’s overall recovery. From turboprops through to single aisle aircraft that operate short sectors in domestic and regional markets, smaller aircraft will certainly have their moment to shine, but within this area, one size does not fit all.

Angus von Schoenberg, Industry Officer at regional lessor TrueNoord reveals their latest analysis on the regional market, covering the upper end of the regional capacity spectrum, comprising aircraft of between 100 and 150 seats. These aircraft are referred to as crossover jets and are often the largest airliners still able to access smaller airports, whilst benefiting from their longer range and lower fuel burn, opening new markets.

A tool for recovery

TrueNoord has carefully compared the crossover jet to both existing regional jets and mainstream narrow bodies. “Notwithstanding the need all airlines currently have to preserve scarce cash due to the COVID-19-induced collapse in traffic – which in the short-term has led new aircraft orders to dwindle to a trickle – the new generation of A220 and Embraer E2 jets can be a tool that will assist airlines to recover”, says von Schoenberg.

These aircraft families offer less seating capacity than typical B737 or A320 aircraft and therefore enable airlines to match capacity with current and projected lower levels of demand. “Often  known as ‘rightsizing’, this harmonisation occurred before the current pandemic during the 2008 financial crisis; however, there is now a big difference.

“In the past, the provision of a lower capacity aircraft did achieve lower trip costs, but the operating expenses per seat were greater so that as soon as demand recovered there was a strong  incentive to deploy larger aircraft.

“The new crossover jets (particularly the A220-300 and the E195-E2) offer costs per seat similar to larger mainstream aircraft including the A320NEO and B737 MAX. As such, crossover jets can both offer the ideal capacity to lead a recovery in short-haul domestic and regional markets, and do so at competitive costs.

“And, hot off the press recent order announcements by OEMs would appear to confirm that appetite for these aircraft is likely to be strong.”

In the medium to longer term, crossover jets can not only address the market hitherto occupied by current generation large regional jets, but can also replace the much larger incumbent fleet of B737-700 and A319s with similar capacity. In addition, TrueNoord suggests that its attractive operating costs may lead them to attract a larger share of the growing low-cost carrier fleet.  Furthermore, such aircraft can address consumer demand for more point-to-point connectivity without transiting through large hubs for indirect consecutive short flights.

Like all constituent parts of the air transport eco-system, nobody can fully assess the likely impact of the COVID-19 pandemic. However, TrueNoord has examined its effects on the 100–150 seat segment so far and reviewed the forecasts of OEMs and leading independent third parties, whilst assessing threats to both of the new programmes.

“On the one hand empirical evidence points to the relative resilience of crossover jets as the number of in-service aircraft is higher than for other classes of aircraft”, observes von Schoenberg. “Alternative evidence suggests constrained appetite. The impact of lower capital costs for both the existing, current generation, large regional jets, and smaller variants of narrow-body jets, renders such aircraft competitive with the crossover jets in many cases. In an environment where relatively low fuel costs persist, the incentive to maintain current generation in-service aircraft remains strong.”

Last but not least, TrueNoord has scrutinised the role of crossover jets in the context of the ongoing pressure to improve the industry’s environmental footprint. “Many governments – so far primarily in developed western European markets – are promoting (and increasingly mandating) a switch from air to rail transport for short haul travel.”

“Given that efficient high-speed rail is only viable on dense city pairs, any negative impact on the crossover jet market is likely to be less than for the larger classes of aircraft that normally serve these markets. For this reason, the evidence largely ignores rail alternatives and mainly assesses air travel in the context of road transport alternatives. While acknowledging the many difficulties of measuring and comparing emissions from different forms of transport, air travel to the types of destinations that are, or are likely to be, served by crossover jets is not such an environmentally unfriendly solution as it is often portrayed.”