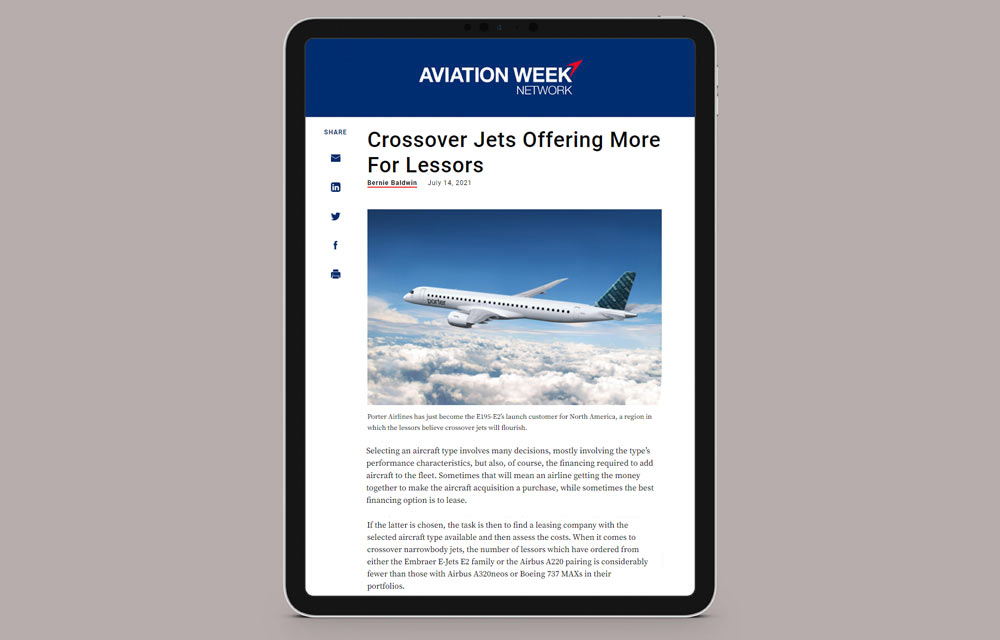 Selecting an aircraft type involves many decisions, mostly involving the type’s performance characteristics, but also, of course, the financing required to add aircraft to the fleet. Sometimes that will mean an airline getting the money together to make the aircraft acquisition a purchase, while sometimes the best financing option is to lease.

If the latter is chosen, the task is then to find a leasing company with the selected aircraft type available and then assess the costs. When it comes to crossover narrowbody jets, the number of lessors which have ordered from either the Embraer E-Jets E2 family or the Airbus A220 pairing is considerably fewer than those with Airbus A320neos or Boeing 737 MAXs in their portfolios.

Among the big names in leasing, GECAS has every type of E-Jet E1, but no E2s yet. The lessor ordered the type in the early 2000s as part of orders with all three regional jet manufacturers of that time – E-Jets from Embraer, CRJs from Bombardier and 728s from Fairchild Dornier. Each of those types was powered by a variant from the GE CF34 engine family.

GECAS is in the process of being acquired by AerCap, which itself has 50 Embraer E190/195-E2s from an order placed by International Lease Finance Corporation (ILFC) at the type’s launch at the Paris Air Show in 2013. AerCap bought ILFC in 2014.

Also among the bigger lessors, Air Lease Corporation led by Steven Udvar-Hazy, has commitments for 50 A220-300s after signing a Letter of Intent at the 2019 Paris Air Show. Among the lessors specialising in aircraft beyond the widebodies and the narrowbody workhorses, Nordic Aviation Capital (NAC) has in its portfolio 149 E190/195 E1s plus seven A220s.

TrueNoord Regional Aircraft Leasing is another of those specialist lessors and currently has four E195-E1 aircraft in its fleet, but is clearly interested in the current models as it has just released its own “Crossover Jets Market Report”.

The lessor’s chief commercial officer, Richard Jacobs, outlines what the company believes are the key characteristics and qualities of these types. “The longer range compared with the earlier generation of regional jets allows the new crossover jets to be a viable replacement for the previous generation of A319/737-700s. We therefore tend to view the crossover jets more as a supplement to the regional operation rather than a replacement of the current generation of E-Jets,” he explains.

“The new crossover jets also offer highly competitive operating costs, which has the effect of killing two birds with one stone,” he adds. “For the first time, such jets can compete with larger narrowbodies on a cost-per-seat-mile basis while offering smaller or similar capacity to the narrowbodies. Secondly, they also mean that another step change in environmental emissions improvement can be achieved.”

Singapore-based Avation has six A220-300s in its portfolio, all leased to airBaltic, according to chief commercial officer, Rod Mahoney. “We don’t see smaller versions as having a large market/customer base – important for a lessor – so we don’t invest in the smaller ‘regional jet’ aircraft variants,” he notes.

Seat-mile cost is also the key characteristic highlighted by Mahoney for these aircraft. “The A220-300 has a seat-mile cost comparable to the larger A320/737-800 but carries lower capacity risk for competitive markets. The similarly-sized A319 and 737-700 (and neo/MAX) have a higher seat-mile cost and a higher purchase price and are no longer being ordered by airlines, orders being the proof of popularity.”

While lessors are confident about the market for crossover jets, the aircraft are likely to flourish to a different extent in each geographic region. “The most likely markets will be those which are highly fractured,” says Mahoney, “and obviously markets where traffic volumes can’t support larger aircraft, with the USA and Europe being the largest markets.”

TrueNoord’s Jacobs also sees markets where range is of value as being important. “That means where distances are longer and traffic thinner than to sustain a large narrowbody, for example within the US, South America to the US, within Europe and between Europe and North Africa, Middle East and CIS,” he notes. “For thicker routes, trading frequency for aircraft size may be a viable option to enhance the quality in the network.

“Within the shorter distances, the new generation crossover jets will have to compete with secondary market regional jets. And with their substantially lower capital cost, fewer weight related charges and maintenance costs, these are hard to compete with – even with more seats in the aircraft,” Jacobs comments.

The COVID-19 effect has seen many airlines seeking to right-size their fleets, which raises the question of whether the lessor’s views of crossover jets’ role in operations has changed as a result of the pandemic. “No, rather that view has been reinforced as it caused many operators to do just what we anticipated (and hoped) they would do – extend their leases,” Jacobs reports. “In the short-term, orders and demand are likely to be slower than what might have been the case without the pandemic, but in the longer-term their role will be greater than before COVID, hence the reinforcement idea.”

Rod Mahoney is even more bullish. “There is an old adage – ‘an airline won’t go out of business because the aircraft is too small’,” he declares.

“Small is good, but it must be paired with efficiency. Airlines will be more cautious for a while following the pandemic, and a smaller efficient aircraft is a good network development tool,” the Avation CCO emphasizes.

Whether by purchase or via sale/leaseback deals, more crossover jets seem more than likely to enter leasing companies’ portfolios bringing further fleet options to the airlines.