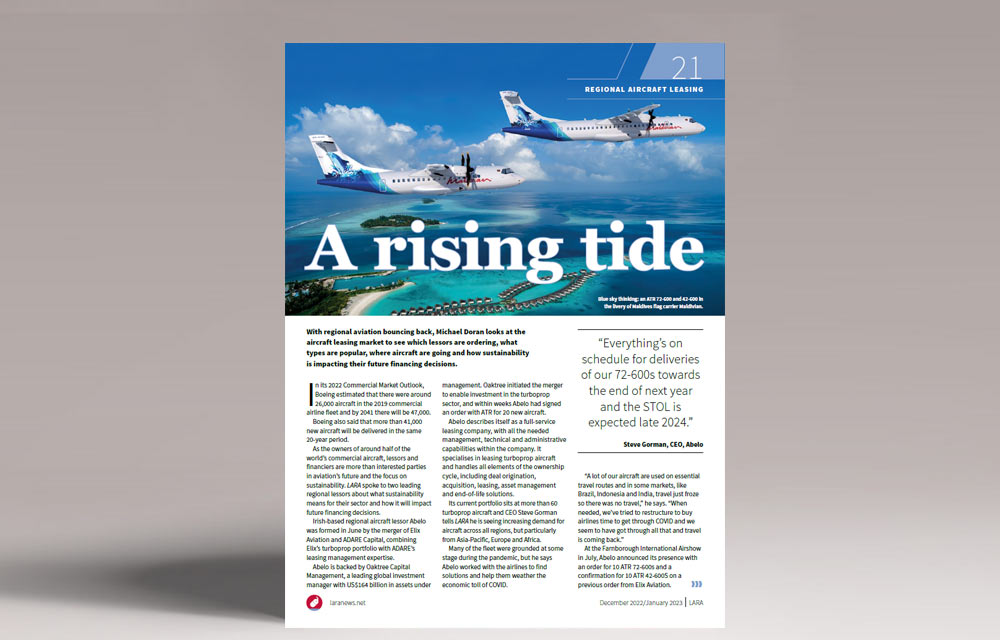 With regional aviation bouncing back, Michael Doran looks at the aircraft leasing market to see which lessors are ordering, what types are popular, where aircraft are going and how sustainability is impacting their future financing decisions.

Boeing also said that more than 41,000 new aircraft will be delivered in the same 20-year period.

As the owners of around half of the world’s commercial aircraft, lessors and financiers are more than interested parties in aviation’s future and the focus on sustainability. LARA spoke to two leading regional lessors about what sustainability means for their sector and how it will impact future financing decisions.

Abelo is backed by Oaktree Capital Management, a leading global investment manager with US$164 billion in assets under management. Oaktree initiated the merger to enable investment in the turboprop sector, and within weeks Abelo had signed an order with ATR for 20 new aircraft.

Abelo describes itself as a full-service leasing company, with all the needed management, technical and administrative capabilities within the company. It specialises in leasing turboprop aircraft and handles all elements of the ownership cycle, including deal origination, acquisition, leasing, asset management and end-of-life
solutions.

Its current portfolio sits at more than 60 turboprop aircraft and CEO Steve Gorman tells LARA he is seeing increasing demand for aircraft across all regions, but particularly from Asia-Pacific, Europe and Africa.

Many of the fleet were grounded at some stage during the pandemic, but he says Abelo worked with the airlines to find solutions and help them weather the economic toll of COVID.

“A lot of our aircraft are used on essential travel routes and in some markets, like Brazil, Indonesia and India, travel just froze so there was no travel,” he says. “When needed, we’ve tried to restructure to buy airlines time to get through COVID and we seem to have got through all that and travel is coming back.”

At the Farnborough International Airshow in July, Abelo announced its presence with an order for 10 ATR 72-600s and a confirmation for 10 ATR 42-600S on a previous order from Elix Aviation.

The 42-600S is the new Short Take-Off and Landing (STOL) variant under development from ATR. “Everything’s on schedule for deliveries of our 72-600s towards the end of next year and the STOL is expected late 2024,” adds Gorman.

All new businesses face challenges and starting an aircraft leasing business amidst the pandemic’s wreckage must have thrown a few the way of Gorman and Abelo over the last few months.

When asked, Gorman nominates the macroeconomic environment of higher interest rates as one that springs to mind.

“We’ve been in an environment of low interest rates for the best part of 12 to 14 years and I think a lot of airline business models have been predicated on that,” he says. “High interest rates feed through to higher lease rates, so how are those increased costs going to be managed?”

Rising fuel costs are also an important issue, but for Gorman both rising fuel and interest costs point to why turboprops are an attractive proposition as airlines look to right-size their fleets.

He says: “With higher capital expenditure costs and higher fuel costs, airlines need to optimise their fleet and make sure the right aircraft are being flown on the right missions – and to an extent that could potentially mean lower passenger numbers. That all tends to suit the regional sector.”

It would be easy to think that Abelo is a catchy name dreamt up by a marketing team, but in fact it is the Esperanto word for a bee. Its association with aviation is that bees can only fly in clean environments, which fits perfectly with Abelo’s mission to deliver sustainable connectivity while reducing emissions.

“When a 72-600 replaces a jet you’re probably saving carbon emissions directly by 40% to 48%, depending on the mission,” says Gorman. “At Abelo our focus is to try and place as many turboprops as we can, and we feel that has a very direct impact on reducing carbon emissions.” Being part of the global finance industry, Abelo is fielding more questions about the ESG (environmental, social and governance) aspect of its leasing activities. Gorman says that financiers are becoming more observant of funding that can lead to reduced emissions.

“We’ve all known that within aviation changes do need to take place, although they can’t necessarily take place very quickly,” he says. “Part of the reason behind setting up Abelo was to be part of that transition.”

Amsterdam-based TrueNoord specialises in leasing regional aircraft on a global basis, with a fleet of both turboprops and regional jets. Included in TrueNoord’s portfolio of around 60 aircraft are ATR 72/42s, Embraer E170/190/195s and De Havilland Dash-8s.

“I think that leasing companies are getting to the point where this whole subject will be a criteria and a formal one in the decision making process, and at the moment it’s extensively discussed,” he tells LARA. “Increasingly it will become part of the due diligence and commercial process.”

As part of his role at TrueNoord, von Schoenberg spends a lot of time talking to investors and writing reports on market developments in various regional aircraft segments. He says a question often asked is if all this new technology is coming then does it make what we have now obsolete or redundant?

Then the question an investor or lessor will ask is not if new aircraft technology is coming but when will it impact the aircraft they have today. So a lessor needs to understand how advanced the projects are and if the technological readiness is really there.

“There’s a lot of these start-up manufacturers who say these new aircraft types will be able to go into commercial service in the mid to late 2020s,” says von Schoenberg. “We’re quite sceptical about that and we doubt any of these aircraft will fly commercially before 2030 at the earliest. In fact we think more like mid-2030s for regional-sized aircraft.”

Financiers tend to look at things calmly and logically, and assessing what an asset is worth years in the future needs that sort of analysis. The reality is that even if hybrid electric or hydrogen-powered aircraft are proven and certified by the mid-2030s, how fast can they be produced to replace today’s aircraft?

“People will have to go on operating existing technology well into the thirties and early forties,” says von Schoenberg. “So at least in the here and now it has very little impact on future residual values.”

As a lessor of both turboprops and regional jets, TrueNoord sees a bright future for both types serving remote communities, small island connectivity and short haul regional markets. The push for lower emissions may well see a trend of more point-to-point flying using smaller aircraft, rather than the hub and spoke model.

“From an environmental perspective it’s a nonsense to do a 90-minute flight from somewhere in Florida to Atlanta and then get on another one for a half-hour flight somewhere else,” says von Schoenberg. “Why not do it direct in either a large turboprop or a regional jet and bypass the hub?”

While reducing emissions is taking most of the environmental focus for now, von Schoenberg believes it’s an over simplification to leave the discussion only centred on emissions reduction, particularly from a lessor’s perspective.

What is lacking is a whole-of-life sustainability discussion, going from an aircraft’s design and manufacture right through to what you do with it at the end of its economic life. Questions like how well are OEMs planning for the parting-out and scrapping processes, which parts can be recycled and which can’t and what’s the environmental footprint of all that?

And if new technology electric or hydrogen aircraft become available, what will be the environmental cost of prematurely scrapping planes that have plenty of service life left in the pursuit of reduced emissions?

“The whole industry, be that leasing companies, operators, maintenance providers and manufacturers need to be moving in the same direction if we are to meet the 2050 net zero goals,” says von Schoenberg. “It’s as simple as that. Everybody has to do their bit if we are to meet that target.”

To shift the story off the sustainability focus, here is a look at US-based Azorra Aviation Holdings, a business that provides aircraft leasing, financing and asset management solutions. Its focus is on regional, crossover and small narrowbody aircraft, with a fleet of 71 owned and managed aircraft.

The fleet is operated by 19 airlines in 15 countries, with a customer mix that includes both legacy airlines and low-cost carriers. A few customers include Air Baltic, KLM Cityhopper, BA CityFlyer, Silver Airways, Porter Airlines and Kenya Airways.

Azorra segments it fleet into three categories that are used by regional carriers. On the regional jet side, it has aircraft including the Embraer E170/E175, as well as the Bombardier CRJ 700/900/1000 series aircraft.

In January, Azorra went on a bit of a buying spree, placing orders with Airbus and Embraer for new aircraft. It ordered 20 A220-300 and two ACJ220 corporate jets from Airbus, and also placed an order with Embraer for 20 new-generation E2 jets, with options for another 30.

In June the lessor had the cheque book out again when it purchased 37 aircraft from fellow regional lessor Nordic Aviation Capital (NAC).

The aircraft were on lease to 13 airlines worldwide and the portfolio included 29 Embraer E-Jets plus eight turboprops, a mix of ATR and Dash-8 Q400s.

At the time of that deal, Azorra CEO John Evans said: “We are thrilled to add these aircraft to our growing portfolio while expanding and diversifying our customer base. These aircraft are suited for today’s market dynamics and are leased to well known airlines around the world.”

A few weeks later, Azorra acquired another 11 Embraer E-Jets from NAC that were leased to four airlines. One of the interesting things about Azorra’s aircraft and customer profile is how closely it resembles the regional market.

Their customers are spread around the world, with some operating at mainline airports, while others are flying into small airports in Guadeloupe, Mozambique, Brazil, Kenya or Mexico. That is the essence of regional aviation, which is all about connecting communities when often the only way to do that is by air.