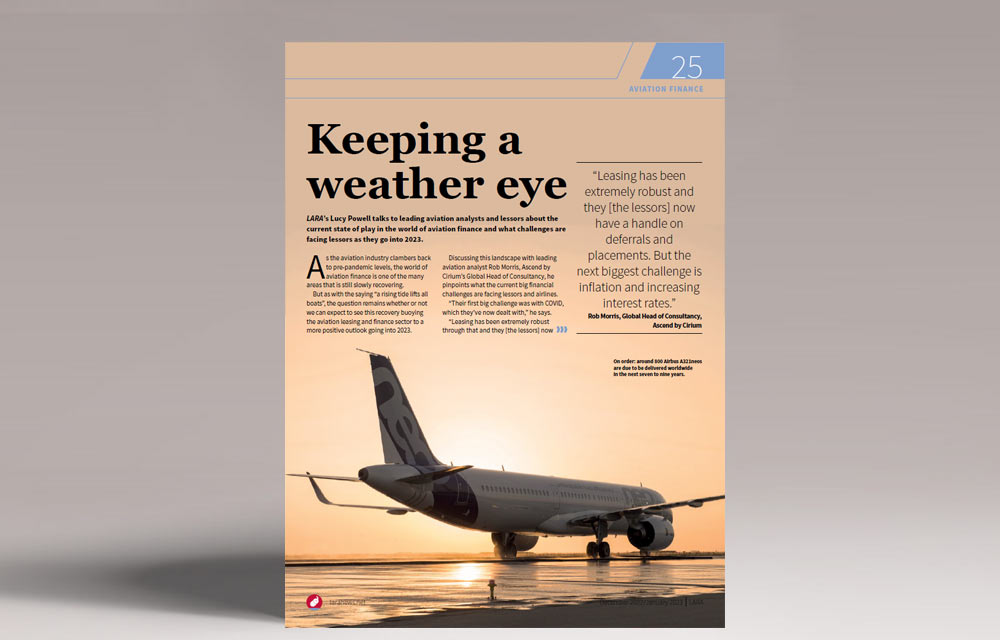 LARA’s Lucy Powell talks to leading aviation analysts and lessors about the current state of play in the world of aviation finance and what challenges are facing lessors as they go into 2023.

As the aviation industry clambers back to pre-pandemic levels, the world of aviation finance is one of the many areas that is still slowly recovering.

But as with the saying “a rising tide lifts all boats”, the question remains whether or not we can expect to see this recovery buoying the aviation leasing and finance sector to a more positive outlook going into 2023.

Discussing this landscape with leading aviation analyst Rob Morris, Ascend by Cirium’s Global Head of Consultancy, he pinpoints what the current big financial challenges are facing lessors and airlines.

“Their first big challenge was with COVID, which they’ve now dealt with,” he says.

“Leasing has been extremely robust through that and they [the lessors] now have a handle on deferrals and placements. But the next biggest challenge is inflation and increasing interest rates.

“There is a risk that it [inflation] and slowing economic growth will dampen demand, and whilst we’re not seeing that risk eventuate yet, lessors are certainly facing increasing costs of funding with increasing interest rates.”

These rising interest rates also paint a rather significant backdrop to the backlog of new aircraft orders placed by lessors; a point Morris flags as something for them to consider over the next few years.

Just over 2,100 aircraft from Airbus and Boeing are still due to be delivered in the next seven to nine years – with approximately 40% of this number being A321neos and 32% being 737 MAXs according to both manufacturers most recent orders and deliveries information. But the question remains – how is this backlog going to affect aircraft financing in the future, if the interest rates into which they’re going to be delivered are only going to increase?

Here, Morris is cautious. “At present, it seems that they’re confident they will be able to cope [with the rising interest rates]. Lessors will typically have in their contracts mechanisms that hedge them against increasing interest rates. But the competitive dynamic in the leasing sector today is quite different to what it was the last time we had high interest rates in the 1980s.”

With leasing occupying at least 50% of the market – 60% for narrowbody aircraft – lessors’ biggest challenge will come from protecting their margins “to be able to increase market lease rates in line with the increasing costs of funds, to finance the assets the lessors manage.”

It is not just interest rates that have the potential to become a growing concern for lessors. There is also the supply and demand of mid-life and older used aircraft currently in service, their availability, and the slow recovery of trading to consider – including the issue of lessors not being able to shift their older aircraft, or having aircraft stuck abroad in Russia.

“There’s lots of aircraft being offered for sale with a lease attached, and there’s some aircraft trading, but overall that volume is lower than it has been in the last cycle,” says Morris.

“We have aspirational sellers with a price expectation based upon their book and lease, but aspirational buyers who – looking at the current market value – can’t make the deal happen.”

“In the short term there remains a mismatch of expectations between financiers/lessors of used regional aircraft and airlines/lessees,” he says. “Operators have become accustomed to the availability of cheap aircraft during the COVID period when supply exceeded demand.”

To further highlight this point, Ascend by Cirium’s data shows the availability of single aisle aircraft stored with lessors dipping back to levels last seen in January 2021.

“As supply is now much reduced and financing costs have risen, many carriers have not yet fully appreciated that the era of low lease rates is over,” says Tieleman. “This has created a gap in expectations that, in the short term hampers market liquidity.”

There is not just the mismatch of expectations in terms of lease rates and supply but the loss of markets too – with a growing number of lessors taking legal action over aircraft lost in Russia, and the Chinese market slow to recover. This is an area upon which Morris touches briefly.

He says: “If you look at new aircraft placement from lessors, nearly 10% went to Russian airlines [and] 9% for used aircraft. So nearly 10% of all used leases were in Russia and you’ve now lost potentially 10% of your demand – so the loss of that market does to some extent impact, potentially, the demand that lessors can drive their supply into.

“China is also a real wild card. It’s the market that has yet to finally fully recover to allow global recovery to be wholly achieved – and until we get zero COVID cases in China, complete recovery won’t be possible.”

However, when it comes to market liquidity for lessors, there are some bright spots.

Morris says that while capital and liquidity requirements are going to increase, “the upside to that, is of course that lessors’ collection rates are pretty close to 100% so they’ll be able to cover a lot of [these requirements] with cash flow. I think that leaves them well placed.”

And it is these bright spots that are worth focusing on.

Looking beyond the backlog of orders, the pressure of supply and demand, and slow production rates, there are some positives for the pre-owned and used leasing market.

This backlog is one that is – to no surprise – benefitting lessors in the short term.

“We see a prolonged future for used aircraft,” says Tieleman. “First, production rates and delivery lead times for newer generation smaller-gauge narrowbodies, or regional aircraft such as the Airbus A220 or Embraer E2, are such that backlogs [are preventing the] replacement of current fleets in the short to even medium term.

One further point to consider is sustainability, and how lessors will contend with managing their pre-owned portfolio versus the continued drive in the aviation industry as a whole towards being greener.

“There’s a significant inertia in fleet,” says Morris, one that is hampering sustainability initiatives, but acting as a comfort to investors.

While it will certainly take a long while for this new fleet to overtake the current generation, Morris says it “does introduce an efficiency which lessors are conscious of because they own 60% of the single aisle fleet today”.

He adds: “But whether they’re just moving with the tide, or they’re the drivers, we will see their portfolios contain new fuel efficient aircraft, and they will be financing more and more new aircraft because that’s what sustainability trends drive.”

However, that’s not to say that sustainability drivers are a death knell for the pre-owned leasing market. Far from it.

With pre-owned and used leasing high in the first half of 2022, the slowdown and delays in production from manufacturers on new aircraft will only work in lessors and airlines’ favour, as IBA’s ESG Manager Jeni Stanley notes.

“As [manufacturers] continue to navigate the ESG regulations [this] will see market demand levels for pre-owned aircraft continue to rise,” she says.

“Airlines have a vested interest in operational efficiency to keep their costs down because of the rising jet fuel prices, and will continue to be as efficient as they can.

“[At present] the focus is on SAF production and offsetting carbon, so we have a few years at least until we see a change in the demand for pre-owned aircraft.”

Tieleman at TrueNoord agrees, and notes that the demand for pre-owned aircraft from airlines has not changed, referencing its portfolio of Embraer jets in particular.

“It would be inaccurate to describe these jets [like the E1] as older-generation aircraft that need to be replaced to meet sustainability targets,” he says.

“We are seeing some carriers upgrading to the latest version, we are also seeing others committing to used current generation aircraft.”

Whilst sustainability targets are very much on airlines and lessors’ minds, this isn’t always reflected in their purchasing habits.

“Many see that switching to newer aircraft to reduce emissions during flight may not necessarily improve their environmental credentials if the life-cycles of current aircraft are not fully utilised,” says Tieleman.

As for the overall picture of aviation finance and what lessors can expect to face, the image appears to be a clouded one.

With macroeconomic challenges, inflation and a slower-than-anticipated global market recovery crowding the skyline like great, grey cumulonimbus clouds, there is still much to be cautious about.

But as passenger loads improve and routes open up, the financial outlook is one that Morris says lessors, and airlines, should still remain positive about.

“The outlook is less certain on a longer horizon because we don’t know how inflation is going to affect purchasing habits. But for now, in the short-term future? I’d say positive, on watch.”

Best keep a weather eye on the horizon, by the sound of it.