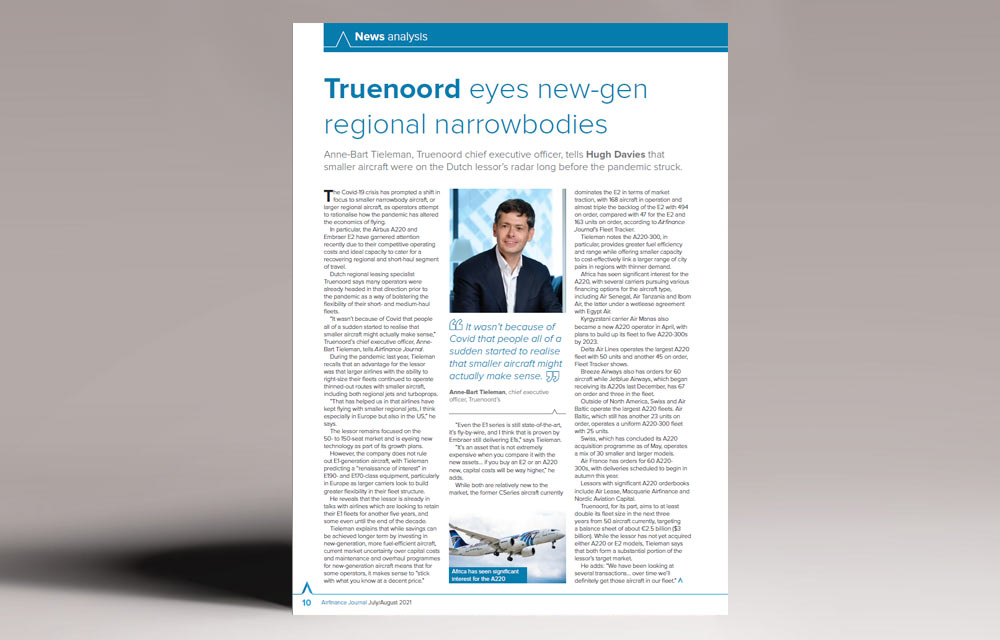 The Covid-19 crisis has prompted a shift in focus to smaller narrowbody aircraft, or larger regional aircraft, as operators attempt to rationalise how the pandemic has altered the economics of flying.

In particular, the Airbus A220 and Embraer E2 have garnered attention recently due to their competitive operating costs and ideal capacity to cater for a recovering regional and short-haul  segment of travel.

Dutch regional leasing specialist TrueNoord says many operators were already headed in that direction prior to the pandemic as a way of bolstering the flexibility of their short- and medium-haul
fleets.

“It wasn’t because of Covid that people all of a sudden started to realise that smaller aircraft might actually make sense,” TrueNoord’s chief executive officer, Anne-Bart Tieleman, tells Airfinance Journal.

During the pandemic last year, Tieleman recalls that an advantage for the lessor was that larger airlines with the ability to right-size their fleets continued to operate thinned-out routes with smaller aircraft, including both regional jets and turboprops.

“That has helped us in that airlines have kept flying with smaller regional jets, I think especially in Europe but also in the US,” he says.

The lessor remains focused on the 50- to 150-seat market and is eyeing new technology as part of its growth plans.

However, the company does not rule out E1-generation aircraft, with Tieleman predicting a “renaissance of interest” in E190- and E170-class equipment, particularly in Europe as larger carriers look to build greater flexibility in their fleet structure.

He reveals that the lessor is already in talks with airlines which are looking to retain their E1 fleets for another five years, and some even until the end of the decade.

Tieleman explains that while savings can be achieved longer term by investing in new-generation, more fuel-efficient aircraft, current market uncertainty over capital costs and maintenance and overhaul programmes for new-generation aircraft means that for some operators, it makes sense to “stick with what you know at a decent price.”

“Even the E1 series is still state-of-the-art, it’s fly-by-wire, and I think that is proven by Embraer still delivering E1s,” says Tieleman.

“It’s an asset that is not extremely expensive when you compare it with the new assets… if you buy an E2 or an A220 new, capital costs will be way higher,” he adds.

While both are relatively new to the market, the former CSeries aircraft currently dominates the E2 in terms of market traction, with 168 aircraft in operation and almost triple the backlog of the E2 with 494 on order, compared with 47 for the E2 and 163 units on order, according to Airfinance Journal’s Fleet Tracker.

Tieleman notes the A220-300, in particular, provides greater fuel efficiency and range while offering smaller capacity to cost-effectively link a larger range of city pairs in regions with thinner demand.

Africa has seen significant interest for the A220, with several carriers pursuing various financing options for the aircraft type, including Air Senegal, Air Tanzania and Ibom Air, the latter under a wetlease agreement with Egypt Air.

Kyrgyzstani carrier Air Manas also became a new A220 operator in April, with plans to build up its fleet to five A220-300s by 2023.

Delta Air Lines operates the largest A220 fleet with 50 units and another 45 on order, Fleet Tracker shows.

Breeze Airways also has orders for 60 aircraft while Jetblue Airways, which began receiving its A220s last December, has 67 on order and three in the fleet.

Outside of North America, Swiss and Air Baltic operate the largest A220 fleets. Air Baltic, which still has another 23 units on order, operates a uniform A220-300 fleet with 25 units.

Swiss, which has concluded its A220 acquisition programme as of May, operates a mix of 30 smaller and larger models.

Air France has orders for 60 A220-300s, with deliveries scheduled to begin in autumn this year.

TrueNoord, for its part, aims to at least double its fleet size in the next three years from 50 aircraft currently, targeting a balance sheet of about €2.5 billion ($3billion). While the lessor has not yet acquired either A220 or E2 models, Tieleman says that both form a substantial portion of the lessor’s target market.

He adds: “We have been looking at several transactions… over time we’ll definitely get those aircraft in our fleet.”